Women’s Army Corps (WAC) Flag Made in the USA 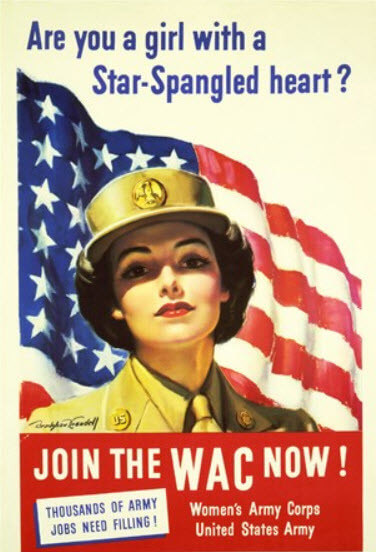 We have these flags custom made in the USA.

The Women’s Army Corps (WAC) was the women’s branch of the United States Army.

Pallas Athene is the official insignia of the U.S. Women’s Army Corps

The WAAC’s organization was designed by numerous Army bureaus coordinated by Lt. Col. Gillman C. Mudgett, the first WAAC Pre-Planner; however, nearly all of his plans were discarded or greatly modified before going into operation because he expected a corps of only 11,000 women.

Without the support of the War Department, Representative Edith Nourse Rogers of Massachusetts introduced a bill on 28 May 1941, providing for a women’s army auxiliary corps. The bill was held up for months by the Bureau of the Budget but was resurrected after the United States entered the war and became law on 15 May 1942. A section authorizing the enlistment of 150,000 volunteers was temporarily limited by executive order to 25,000.

The WAAC was modeled after comparable British units, especially the ATS, which caught the attention of Chief of Staff George C. Marshall. In 1942, the first contingent of 800 members of the Women’s Army Auxiliary Corps began basic training at Fort Des Moines Provisional Army Officer Training School, Iowa. The women were fitted for uniforms, interviewed, assigned to companies and barracks and inoculated against disease during the first day.

Its first director was Oveta Culp Hobby, a prominent woman in Texas society. The WAC was disbanded in 1978, and all units were integrated with male units.

About 150,000 American women eventually served in the WAAC and WAC during World War II. They were the first women other than nurses to serve with the Army.

This WAC Flag works well with a Free Spin No Tangle Flagpole.

“Proudly Made In The USA”

“Thank you for making it possible for Americans to buy American flags made in America! We purchased your flag and did so primarily because the product is “Proudly Made In The USA”.

Thank you for the excellent service

“Our flags arrived today! Just wanted thank you for the excellent service. You have a great product, and I know how busy you guys are trying to meet the demands of every other school around this time of year”

“I wanted to take a minute to thank you for all your help . From the first call that I made till the end of the project – you were nothing but professional and helpful .”

How great of a job

“Everyone was so impressed by the quality of the banners. We can’t say enough about how great of a job you did with this.”

I was totally blown away

“Oh my gosh! My flags arrived today and I can’t believe how amazing they look. I brought them to work today to show them off and everyone was totally blown away! Thank you so much! “

A note of appreciation

“This is just a note of appreciation. I wanted to let someone know how proud and honored I was when your flag was raised today under the American flag that my late father-in-law always flew.”

“Your flag company is extremely detailed-oriented and excels in distinction! Top-Notch quality product and I highly recommend this Superior Seller. Sales, Service and Product Perfection! Fast shipment. THANK YOU!”

The colors are perfect!

“We received our flag today and it’s beautiful! We love it! The colors are perfect! Thank you for being a part of our 30th Anniversary Celebration and creating a wonderful memory for us to share with everyone! “

We purchased our second 3 x 5 flag

“We just wanted to thank you for the wonderful quality product your company sells. We purchased our second 3 x 5 flag with embroidered stars and individually sewn strips. We are so proud to have your flag hanging in the front of our house. Thank you again.”